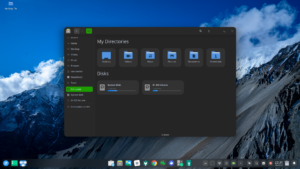 deepin is an elegant, easy to use and reliable domestic desktop operating system released by Deepin Technology Co., Ltd. deepin featured applications have been preinstalled in deepin. It allows you to experience a variety of recreational activities, but also to meet your daily needs. With continually improved and perfected functions, we believe deepin will be loved and used by more and more users.

The application overview view, which can be opened by clicking on the "Launcher" button in the bottom left corner of the screen, or the Alt+F2 key combination. It allows you to quickly find and launch applications.

The new Dock consists of the traditional Dock + Tray (system level + program level). Clicking on the Dock panel brings up the 'System level tray display' and 'Dock display' options, which allow the user to customise the display of the system level tray and the display of the Dock.
The traditional bottom Dock, which quickly opens frequently used applications (the horizontal bar at the bottom of the screen). It consists of the application launcher, the Show Desktop button, frequently used application shortcuts and the system tray. Supports the addition and removal of application shortcuts and displays a list of open application windows.

It will alert you to notifications from chat or other applications, or from the system, and will be displayed in the bottom right corner of the screen. The message tray will be improved in a later version.