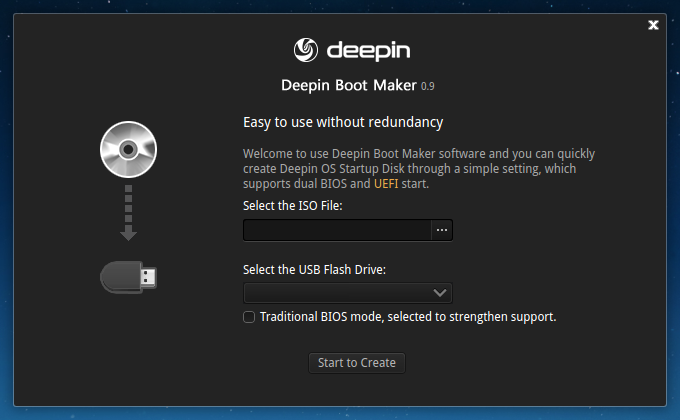 Today, Deepin Boot Maker updates a little and the main changes are:

* Some UI details changed, such as support for drag and drop actions to add ISO mirrors.

The software is an open source software, Github address: https://github.com/linuxdeepin/deepin-boot-maker

Deepin Boot Maker can be run by double click on running programs after downloaded(32Bit/64Bit) and unpacked.

Deepin Boot Maker can be run by double-click after downloaded ( download here ) .

The day before yesterday , Deepin Boot Maker was officially opened to test, we received many feedbacks from users and now we take this opportunity to answer some simple questions with highest frequency.

A: Users who asked this question did not view the announcement carefully ... Only Windows XP users need to install DirectX. The reason is that Deepin Boot Maker Head End is implemented by QT5 technology, but Qt5 needs support from OpenGL which requires DirectX support in Windows platform and default DirectX version of Windows XP is older, so Windows XP users need to update DirectX, that’s it.

Q: Why do you develop Deepin Boot Maker and can DD command (Linux platforms)or UltraISO (Windows platform ) not be used?

A: At present, many Linux desktop users are not using the command, and command operation should not be recommended in order to reduce the learning cost of new Linux users . It is a big problem that U disk wrote by DD is unable to identify under Windows. For UltraISO, currently the writting way of the software for ISO mirror is stereotyped and never modified for ISO in different systems, which results in failure after using UltraISO to make Deepin boot disk and language changed to English after entered into installation system( Chinese and English ISO mirrors installed ) .

Q: Why is the underlying technology implemented by using unetbootin?

A: Because the syslinux boot technology used by unetbootin supports to adjust writing ways for ISO in different systems, and can greatly improves the making success rate of boot disk .

In short , the more efforts we made, the less troubles users got. We believe greater improvement can be made on user experience under Linux after that.