In deepin 20.5, a great of practical features collected from user feedback are developed and released, the Stable kernel is upgraded to version 5.15.24, underlying vulnerabilities are fixed, and system compatibility and security are enhanced further. Welcome to try it.

Face recognition, one of the biometric authentication methods, is supported on adapted devices. After enrolling your face in Control Center, next time on the lock screen and the login interface, you can log in to deepin with your face ID.

By clicking "Pin Screenshots" before taking a screenshot, the captured screenshot will be sticky on top of windows, and its position can be moved. While "pinning" this picture to the desktop, you can use other apps at the same time to improve work efficiency.

It supports multiple practical functions such as automatic mail receiving after network reconnection and custom folder management, comprehensively optimized the interactions, and replaced the framework and plugins with the popular vue+tinymce, bringing a better user experience.

It offers the entries for sending feedback and asking for updates. When you have app installation and update problems, submit the issues on the app page directly to the official support and get solutions. What's more, it supports touchscreen devices with one-finger and multiple-finger gestures.

The retrieval accuracy and search scope have been greatly optimized, and file types and file extensions can be used as keywords for precise search. 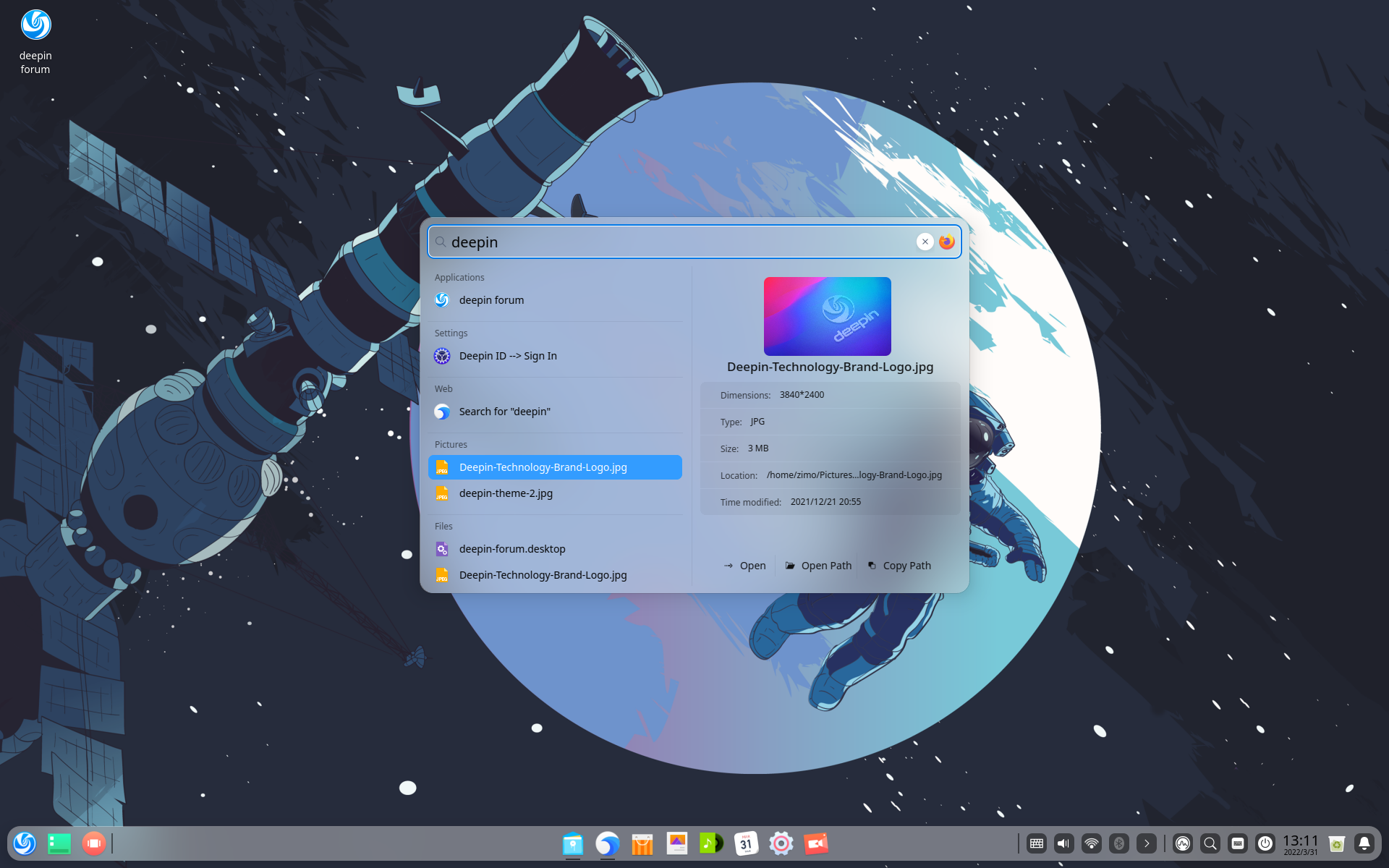 Multiple IPs can be set for a single wired network adapter.

The interactions of password authentication for wireless networks are optimized.

File types and file extensions can be used as keywords.

The search scope is enlarged.

Devices can be enabled/disabled.

Local drivers of devices in deb format can be installed, updated, and uninstalled.

The performance for viewing DOCX files is optimized.

In the new version, you can:

Automatically receive emails when the network is reconnected.

Add folders to and remove folders from the Favorite folder.

Switch the character encoding to fix the display error in the email body.

See the "Send Time" in the forwarded email.

Send files by clicking the "Send by email" option in the right-click menu.

Get enriched functions of mail editor.

Screenshots can be pinned on top of windows.

Playlists can be reordered by dragging and dropping songs in them.

Some error messages are added.

Some error messages are added.

The logic of file deletion and restoration is optimized.

The display of Album is optimized when it is called by third-party applications.

Custom corner markers can be added to files by third-party programs.

Custom context menus can be configured by third-party programs.

Showing file extensions in file names can be enabled or disabled in settings.

Some special characters are supported in file names.

Some touchscreen devices are supported.

The feedback page is added.

"Ask for update" is added on the app details page.

"Do not show installed applications" is added in the Settings of the main menu.

It is available to drag and drop the window on the left and top of App Store.

Prompts for downloading and installation failure are added.

Downloading and installing extensions in App Store are supported for Browser over V5.5.4.

LibreOffice is upgraded to V7.0.4 and the libreoffice-gtk3 style is added.

The information in the "Services" module is optimized.

The systemd250 is integrated.

Fixed: after installing the flatpak package of Telegram and upgrading Telegram, its icon was not shown in the launcher on some devices.

Fixed: multiple identical icons were in the tray area of the Dock on some devices.

Fixed: after successful updates in dual-screen extended mode, it changed to copy mode on some devices.

Fixed: in 12-hour time format, the time in the Dock was incompletely displayed.

Fixed: failed to automatically lock screen on some devices if the focus was on an unselected option.

Fixed: wireless networks cannot be found and listed on some devices.

Fixed: some app icons were wrongly displayed in the Dock on some devices after the apps exited.

Fixed: failed to open the launcher after system updates on some devices.

Fixed: the brightness value in Control Center was shown incorrectly on some devices.

Fixed: the logo on the lock screen was wrongly displayed if the display scaling was set to 5 on some HiDPI screens.

Fixed: failed to restore the maximized window of Control Center the first time on some devices.

Fixed: the WPS apps were blurry when the display scaling was set to 1.25.

Fixed: the backup time was 8 hours earlier than the modification time on some devices.

Fixed: the system cannot be entered on some devices after restoring to factory settings with full disk encryption.

Fixed: When copying a small file to a USB flash drive on some devices, the progress was very slow.

Fixed: the icon of Document Viewer was missed in the "Open with" window on some devices.

Fixed: it crashed on some devices when you selected a video file and hit the spacebar to preview it.

Fixed: after replacing text and closing Text Editor twice on some devices, the paste function was unavailable the third time.

Fixed: an abnormal blank window had appeared when you pressed the spacebar to play a video on some devices.

Fixed: failed to play videos from URL addresses on some devices.

Fixed: it crashed on some devices after opening Movie on the desktop and playing a video from an URL.

Fixed: it crashed on some devices in the process of installing applications.

Fixed: the installation failure message was shown on some devices even though the applications installed were opened.

Fixed: large banner thumbnails took up a large amount of CPU on some devices.

Fixed: it did not display all changelog content on some devices after clicking the "More" button for applications to be updated.

Fixed: the application had been installed while its status displayed was "downloading".

Fixed: the searched keywords were missed in the input box after performing the search operation and jumping to the "search results" interface.

Fixed: it was available to search for files under hidden directories.

Optimized: its stability and performance.

Fixed: system updates were stuck on some devices and the system cannot be entered.

We solemnly thank those community teams and companies who have provided testing, documentation, translation, and mirroring support. Welcome to use deepin and join our forum to submit feedback and share your suggestions